One of the most popular dishes in Eastern European cuisine is Filled Dumplings, known as: Varenyky,  in Ukrainian (also very often referred to, incorrectly, as “Pyrohy” ), or Pierogi in Polish.  They are made from homemade pasta dough, and filled with variety of fillings, but potato and cheese filling is on of the most popular ones.

It is definitely  a “labor of love” for those who make them from scratch, as it requires several hours of preparation time, but it is so well worth it.  The commercially mass produced “Pierogies” just do not measure up to the homemade version!  I was so proud of my daughter when she made these for the first time without asking for assistance….:-)

These dumplings were made for generations, but if you ask your mom, or grandma, for a recipe, you get a very vague list of ingredients with even less detailed preparation instructions.

The first time I made Varenyky at the age of 18, way before the life-saving Google time, so kind of played by ear with measuring the ingredients and perfecting the dough, but to my surprise they turned out quite well.

Now we thank Google and YouTube, for being our ‘personal assistants’ in anything we wish to try out.

Today I will share my own ingredients, step-by-step instructions as well as pictures, so you can give it a try and enjoy your own homemade varenyky/pierogi.  The filling needs to be prepared ahead of time, to allow it to cool off before use.

Potato filled Varenyky are best served warm with onions sautéed in lots of butter, accompanied by a dollop of sour cream, or gently sauteed to make them crispy.  YUMMY!!!!! 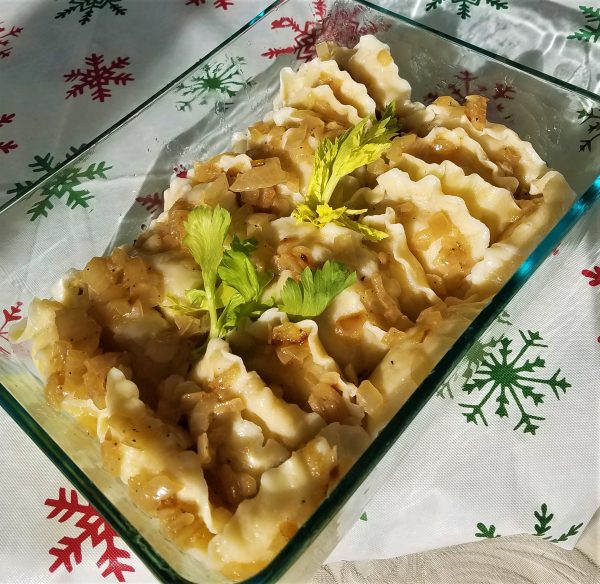 This is how I serve my verenyky, whether they are fresh or need to be reheated before serving.  They never stick together since they are stacked up side by side with the round edge down and the pinched sides up.  I smother them with lots of butter and sauteed onions over the top.

If I have to reheat them, I add 1/4 to 1/2 cup of water into the pan (depending on the size of the pan), cover the pan tightly with aluminum foil, and keep them in the oven at 250 degrees F until they are nice and hot.  The little bit of water in the pan creates steam during the heating time to make them nice and soft and prevents them from getting scorched from the bottom.  If you are pressed for time, you can start heating them for 10-15 minutes at 350 degrees F, then turn down to 250 for a few more minutes until warm enough to serve.

They also freeze very well, but need to be cold and well coated with oil, or melted butter, to prevent them from sticking. Then layer one dozen of them in a zip lock plastic bag, close securely while letting out as much air as possible, and they may stay frozen for up to 3 months.

Someone just told me that they add softened butter to their dough, so I tried it, and it is such a wonderful change.  It makes the dough so soft and pliable, therefore I UPDATED my original recipe with this adjustment (March 2018).

This recipe makes about 60 pieces of varenyky (using 3″ biscuit cutter).

Start your dough on a countertop,  or in a large bowl. Use a spoon to incorporate the wet ingredients with the dry ones, until the batter is thick enough for kneading. Once the dough is soft and silky, form a ball, cover it with a tea towel and let it rest for at least 15 minutes. Roll out your dough to about 1/8 inch thickness, to get it ready for cutting out circles. Using a 3 inch biscuit cutter, cut out circles from the rolled out dough, until all is used up. Place the circles on a floured tea towel, and cover with another towel to prevent them from drying out. Place a heaping teaspoon of filling in the middle of a dough circle, or roll your potato filling into ready to use balls, the size of a walnut. Fold filled circle in half, and pinch sides together well enough so they do not open up.  Poorly sealed Varenyky will open up during cooking, and the filling will boil out.