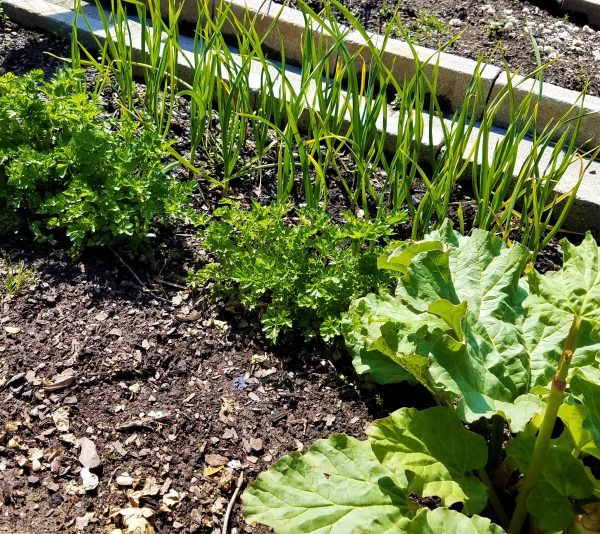 Gardening is my fun outdoor activity.  My garden is too small to be sustainable, but we do enjoy the homegrown veggies, herbs and berries.

Right now my perennial plants came back to life, and are loving the sun and warm weather.

The above picture displays my Rhubarb, Italian Parsley, and Garlic.

The Italian Parsley is from last year’s planting.  In the Fall, just before the first killer frost, I cut off all the green tops, and froze them for later use.  The short stems and roots remained in the ground thru the winter, and as soon as the weather warmed up, they began new growth.

The Garlic was planted late last Fall, sprouted, survived the Winter, and now is continuing to grow.  I used 2 large heads of garlic, split it into single cloves and planted each separately.  They will continue to grow until most of the green tops dry off, at which time I will dig them up, dry them off and keep them in a dry place for several months to use.  I believe it should produce over 25 heads of garlic, which is a great return from just 2 heads used for planting.  They most likely will not be as large as the store bought ones, but much more pungent in taste and fragrance.  In the Fall I will plant new ones for next year’s harvesting.

This rhubarb was planted last year from a root, but this year I will actually begin using it for cooking and baking. 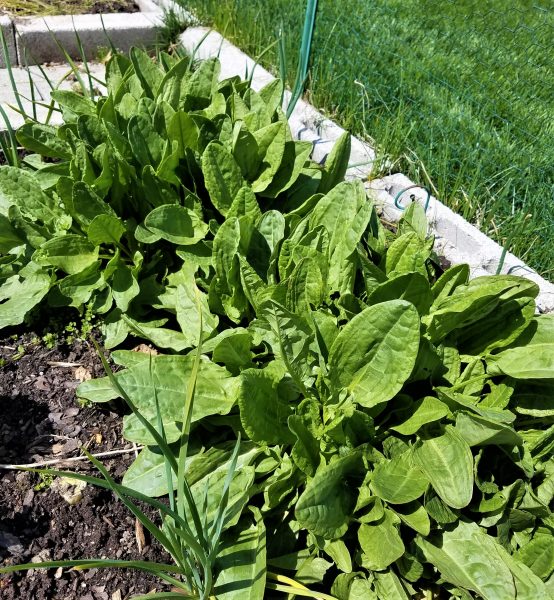 The Sorrel plant is a true perennial, and a fast growing and branching out plant.  I cut it down every month or so, and it continues to grow new leaves all over again.  It is more than I can use for us, so I also give some away to others.

I use Sorrel leaves for a Green Borscht, a soup which is very popular in Europe and very refreshing in taste.   Sorrel, like Rhubarb, should not be consumed too often by people with kidney issue, gout, or arthritis. 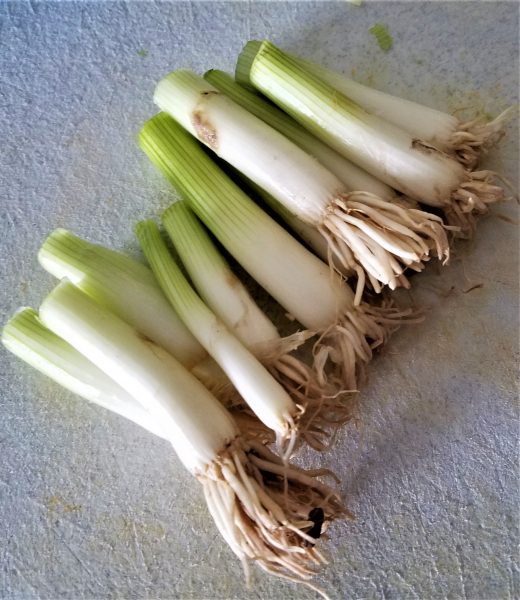 The above Scallion roots came from a bunch of scallions I purchased few weeks ago when I was getting ready to make appetizers for St. Patrick’s Day Party, which did not take place due to the coronavirus outbreak. 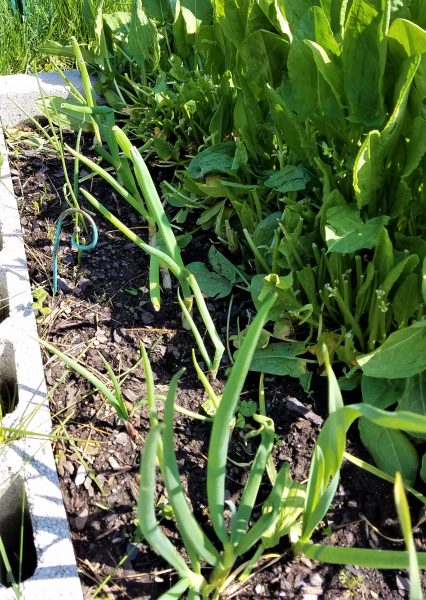 I plated the roots directly into the soil in my garden only a few days ago, and I noticed some of them already are growing new shoots.  I will have FREE Scallions, and they will continue to come back for several year, as they are replacing my previous crop which was getting a little leggy already.

Since I bury all my veggie kitchen scraps in my garden, I am looking forward to seeing potatoes, tomatoes and peppers to start sprouting all around my garden.

Besides planting veggies and herbs, I also am starting this Sour Cherry tree, which originated from my parents property in Poland, then replanted into my sister’s orchard in Krakow, and now a baby plant in my yard in the US.  I am very excited and very protective over this one, as I am not sure if such opportunity will ever be possible again in my lifetime.  I am very glad it survived its first winter in the US, and now coming back to life.  I can’t wait to see it bloom and start producing delicious fruits.  Once it establishes itself, it will grow little saplings, which then can be transplanted into my children’s yards or even to form small orchards.  These cherries are very juicy, a little tart, but totally different from the Bing Cherries we all are so accustomed to in the US. 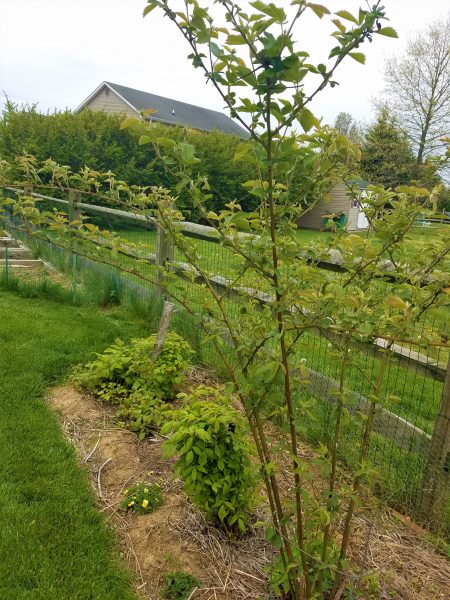 This is my second year of Thornless Blackberry bush, which produced beautiful and juicy fruit last year, so this year it will produce even more.  Also, next to it is my Everbearing Raspberry bush which produced plentifully last year from June thru October.  I am also looking forward to its saplings, so I can expand my berry patch. 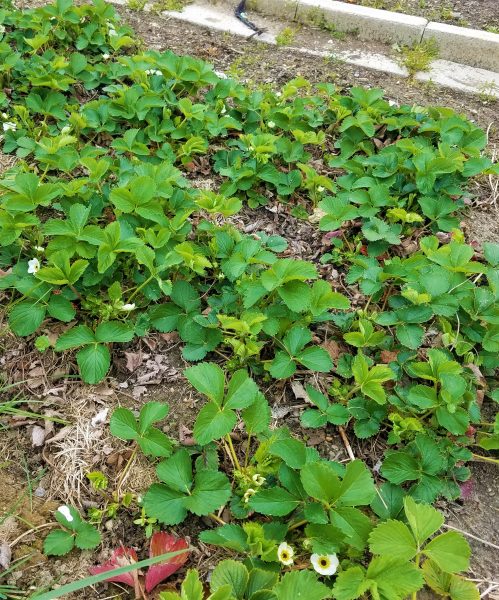 I used to have the regular Strawberry bushes which produce only during June.  Then for the rest of the season they keep on growing bunch of runners, which need to be controlled to prevent over crowding. Hence, these require a lot of maintenance for their short producing season. 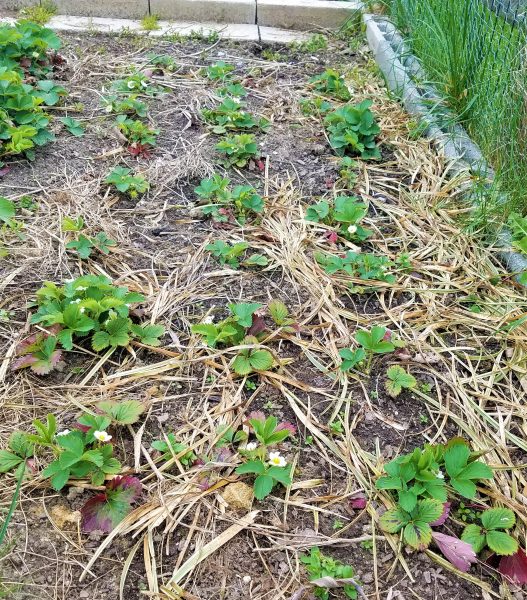 I was very excited when I located these Everbearing Strawberries, so purchased 4 plants 2 years ago.  Last year they produced a lot of fairly small fruits, but they were reproducing from June thru late October.  They do not grow runners, but rather grow additional plants from the same root.  As you can see, from my original 4 plants I was able to split them  into current 20 plants.  Eventually I will replace all my one season strawberries with the everbearing ones.

I am looking forward to warmer weather so I will be able to seed my veggies in the rest of my garden and watch them grow and produce. 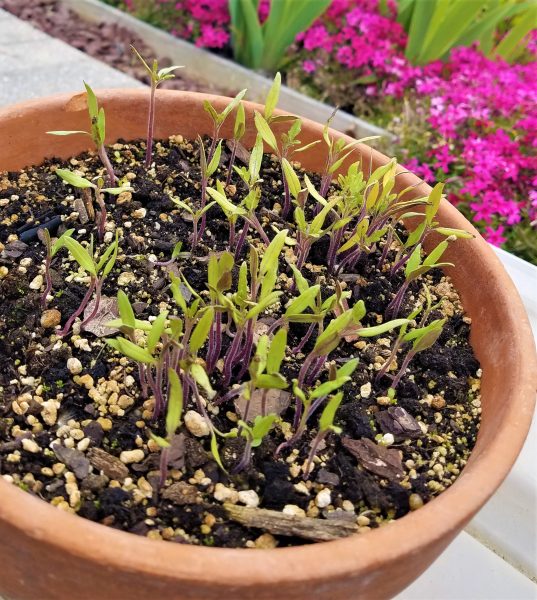 These will be my FREE Off The Vine Tomatoes.  I purchased several tomatoes for a recipe I was going to prepare, but then the situation has changed, so my tomatoes stayed on my kitchen counter for couple of weeks.  When I sliced the last one to use in my salad, I noticed something strange about the seeds inside of it.  They started to sprout right inside of the tomato.  I scooped out the seeds and buried them under a shallow layer of dirt in the above pot, watered, and covered it with a plastic bag to retain heat and moisture.  To my amazement, about a week later I peeked into the pot and noticed the little sprouts poking through the dirt.  I moved the pot outside on the patio to soak up the sun and continue to grow.  I keep it uncovered during the day, but still cover it for the cooler nights.  I will have enough tomato plants for my garden, and many more to share with others. 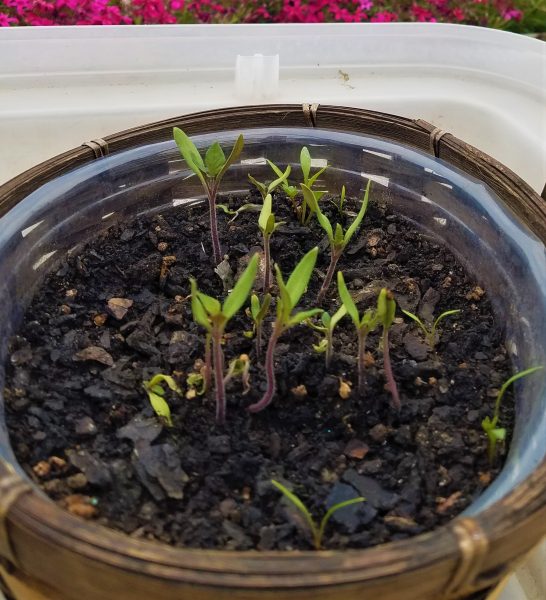 I am extremely excited about this plant, named LUBCZYK in Polish, LOVAGE in English, LUBISTOK in Ukrainian,and LANGENSCHEIDT in German.  This herb is very popular in Europe, almost like is Celery in the US.

I started it indoors from seeds received from my sister in Krakow, and tend to it the same wasy as my tomatoes plants.  Once they get taller and stronger, I will transplant them into a permanent place in my herb garden.

My mother always used the leaves of this plant in all her soups and other dishes, because it adds such a unique and refreshing flavor to every dish. 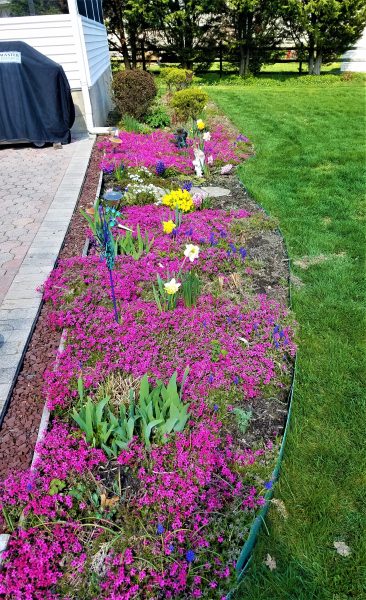 I had to finish this post with a splash of color, hence here my hot pink Creeping Phlox, which adds so much color to my flower patch in the early Spring.  It also serves as a wonderful natural ground cover for the rest of the season, so I don’t have to mulch so much every year. 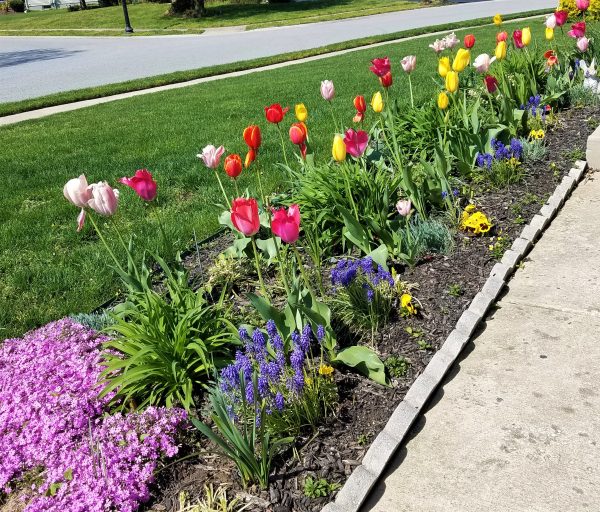 I was about to publish this post, then my tulips opened up in front of my house, so I just had to include this picture to add more cheer to this story.